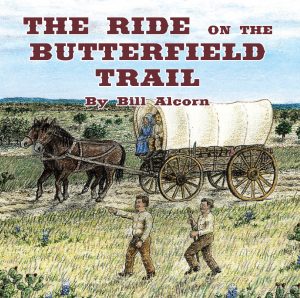 From beginning to end, The Ride on the Butterfield Trail was a project of love. The author, Bill Alcorn, is my father, and he’s been telling stories for as long as I can remember (some of the most entertaining ones were true). When my brother and I were young, he made up bedtime stories to tell us, and years later when he and his second wife, Ruth, became grandparents he made up new stories for a new generation. One of those was the story that eventually became The Ride on the Butterfield Trail.

Over time, Bill’s love of story grew into a dream of a published book, so he sat down and typed out the Butterfield Trail story and researched how to get published. He shared the story with many of us in the family, including a niece who was a school teacher, and me, who had a bachelor’s degree in journalism. Unfortunately, none of us at that time had enough knowledge or connections to get him any further than vanity publishers, which are notorious for charging a lot of money and burdening authors with cases of books they can’t sell. Soon after, Bill and Ruth got busy taking care of elderly mothers, and an uncle who suffered from diabetes and Alzheimer’s. As the caregiving demands increased, Bill’s publishing dream got set aside.

Fast forward to 2016. Bill and Ruth are finally getting a chance to rest and enjoy their retirement years, and I now have about five years of editorial experience under my belt. While cleaning out some files one day, I came across the story that had been collecting dust for a number of years and realized I had the opportunity to give my dad a well-deserved gift. I now had the resources and the know-how to make his dream a reality, so with the help and support of my brother, I set out to bring The Ride on the Butterfield Trail to life.

After doing some light editing on the story, I contacted my cousin, David Gilmore, who is an incredibly gifted artist. (He’s a cousin on our mother’s side of the family, but has always been close to our dad.) I knew David’s drawing style would be a perfect fit for the story and hoped he’d be willing to provide a few illustrations, and would make the gift even more meaningful. David was excited about the project, but initially had to decline due to some serious back and neck problems. I was disappointed, but understood, and set out to find another illustrator. But God, in His infinite wisdom, allowed me to get distracted with other things, and during my delay provided some healing to David, and several months later he emailed me with some sample sketches. Within a few weeks, David sent me some beautiful drawings that truly brought the story to life and could not have been more perfect for the book.

Finally, in the summer of 2017, with the help of some wonderful people–including the awesome Lindsey Cousins who did the interior layout–the book was ready to print, complete with a beautifully drawn cover from David.

Up to this point, the only people who knew about the book were my brother, David, and me (and our spouses). But none of the family, including the other four children, fourteen grandchildren, or eighteen great-grandchildren, knew about the book, and our plan was for the book to be a surprise gift for them as well. I enlisted the help of my step-sister, Donna, who lives near the folks in Graham, Texas (our home town), to help me plan a big “book reveal.” As luck would have it, much of the family was going to be in Graham the first weekend of August, so we planned a family event that would allow us to reveal the big surprise–complete with a book signing session.

However, as we all know, life doesn’t always go as planned and sometimes God’s bigger picture looks different than we imagine. A week before our scheduled family event, Ruth was hospitalized with an infection and within a few days suffered a massive stroke. The family was told she would not recover.

Although the book reveal didn’t go as planned, we were able to present the book and my dad was able to read it to Ruth–his best friend and wife of 40 years–before she went to her Heavenly home on August 10, 2017.

When I started this publishing project, I would never have imagined the events would unfold as they did. But in the midst of a profoundly sad life chapter, The Ride on the Butterfield Trail has brought my family together in a way none of us could never have orchestrated.

My dad is working through his grief and adjusting to his new life. But he’s having a wonderful time sharing his story, and in 2018 we plan to be working on the next installment of Ed and Jimmy on the Butterfield Trail. 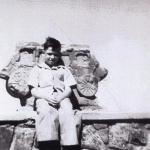 The inspiration for this story can be traced back to the 1940s when Bill Alcorn was a child and visited the actual stagecoach monument featured in the book. The monument sat alongside a road near the town of Newcastle, Texas but was later moved to the museum at nearby Fort Belknap, which was one of the major stops for the Butterfield Overland Mail Route.

You can learn more about the Butterfield Overland Mail route on the Texas State Historical Association website, and the Texas Forts Region website.

And, for some good historical entertainment, buy The Ride on the Butterfield Trail.

Get Our Latest News

Get Our Latest News